Collaboration with The Gerontological Society of America (GSA), the largest US organization with more than 5.500 members devoted to research, education, and practice in the field of aging, takes place through the Humanities & Arts Committee, where Roberta Maierhofer was appointed member in 2012. At the annual conferences, Ulla Kriebernegg and Roberta Maierhofer have been invited to participate in workshops and discussion rounds. The members of the H&A Committee see their task as introducing a humanities and social science perspective. At the initiative of the GSA's Humanities & Arts Committee, Michael Haneke's film Amour (Winner of Best Foreign Language Film at the 2013 Academy Awards) was shown. Roberta Maierhofer and Ulla Kriebernegg initiated, and Maierhofer chaired a dicussion on the film together with Jim Vanden Bosch, Rick Scheidt and Helen Kivnick at the Annual Meeting of The Gerontological Society of America (GSA) in New Orleans on November 21, 2013. 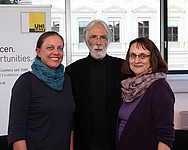