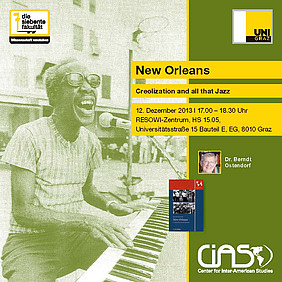 Only a few American cities are the production centers of cosmopolitan culture. New Orleans, the northernmost Caribbean metropolis, must be counted among them. It is marked by a unique sense of place; and it clearly is a place for the senses. Yet, after Katrina many prominent Americans have suggested giving up the city or large parts of it. It is telling that the cultural capital of New Orleans remains largely invisible to the American public, but is admired throughout the world. Most of it (food, sex, music, religion, architecture) belongs to the world of the senses and is embedded in the popular expressive arts: therefore the city has acquired the role of the sensual other, the Big Easy, that lacks civic (and moral) legitimacy. Much of the cultural capital of the city is buried in a complex, tripartite racial history, which threatens the binary logic of North American racism with all sorts of sensual transgressions. Over time the city has shored up a ethno-nostalgic heritage and a contradictory cultural history of race relations that needs to be rescued from oblivion, for it treasures those sedimentations and resonances, which give New Orleans its uncanny, urban aura.