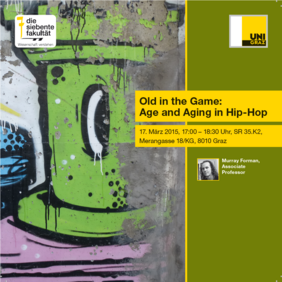 Old in the Game: Age and Aging in Hip-Hop

Murray Forman studies media and culture with a primary focus on popular music. For over twenty years he has engaged in research about hip-hop culture, contributing to the emerging field of hip-hop studies.

He is author of The ‘Hood Comes First: Race, Space and Place in Rap and Hip-Hop (Wesleyan University Press, 2002) and Co-editor (with Mark Anthony Neal) of That’s the Joint!: The Hip-Hop Studies Reader (Routledge, 1st edition 2004; 2nd edition, 2012). His most recent book is One Night on TV is Worth Weeks at the Paramount: Popular Music on Early Television (Duke University Press, 2012).

Professor Forman is an inaugural recipient of the Nasir Jones Hip-Hop Fellowship at the Hip-Hop Archive, the Hutchins Center for African and African American Research, Harvard University (2014-2015).

Old in the Game: Age and Aging in Hip-Hop

While hip-hop is commonly associated in many mainstream contexts with youth practices and tastes, it has been a long time indeed since it could easily be defined as a facet of youth culture; generational turbulence abounds within contemporary hip-hop. Professor Forman critically examines the ways in which the past (as lore, tradition, and legacy) is constructed and understood in contemporary hip-hop and illuminates the manner in which individuals of different ages interact with one another according to multiple factors relating to experience and familiarity, rules, laws, and wider cultural norms as well as established hip-hop conventions. By focusing on an alternative cartography of age and aging he offers new perspectives on the character and representation of hip-hop elderscapes.