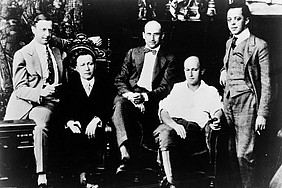 As part of the research project "Interpreneurship: Styria meets the USA" (funded by the Land Steiermark, Referat Wissenschaft und Forschung), and in cooperation with the U.S. Embassy Vienna, the Center for Inter-American Studies cordially invites you to join us for a virtual guest lecture (powered by Zoom). It is our distinct pleasure to welcome back film scholar and filmmaker Dr. James Forsher who will give a talk on "The Jewish Entrepreneurs of Hollywood".

Jewish Americans were excluded from most industry at the turn of the last century. When the motion picture was developed, many saw an opportunity and jumped in early, allowing them to jumpstart an industry that was not even on the radar of most of their contemporaries. Using Paramount Studios pioneer Adolph Zukor as an example, this talk will trace his journey from a small town near Budapest in the 1880s to creating the largest studio and theater chain in the world in 1920s.

We will convene virtually on Monday, May 25 at 6 pm (CEST). The guest talk will take place in a secure, virtual, real-time, audio-video environment powered by Zoom. The U.S. Embassy Vienna will livestream the event on their social media channels. In order to receive your Zoom session key, you are asked to register for the event by Sunday, May 24 at 1 pm (CEST). Please register with Dr. Stefan Rabitsch at stefan.rabitsch(at)uni-graz.at. Participants who are registered will receive their Zoom session key via email in the morning of May 25.

We are looking forward to welcoming you at Dr. Forsher's talk.

James Forsher, Ph.D., is a retired academic who taught at Florida State University, Temple University, Seattle University, California State University-East Bay, and the Seattle Film Institute and wrote, among others, THE COMMUNITY OF CINEMA: HOW CINEMA AND SPECTACLE TRANSFORMED THE AMERICAN DOWNTOWN (Praeger, 2002). He served as Fulbright Visiting Professor at the University of Klagenfurt in 2015 and Fulbright Specialist at the University of Vienna in 2018. Next to his academic career, Jim has directed and produced films and TV shows such as HOLLYWOOD CHRONICLES (Discovery, 1990) and LOST WARRIORS (PBS, 1998). Jim recently developed and narrated an ORF/Kurt Langbein production about his mother, ELVIS UND DAS MÄDCHEN AUS WIEN (2017). His latest book is STOCK FOOTAGE AND EVERYTHING ELSE UNDER THE SUN: USING ARCHIVAL MATERIAL TO MAKE YOUR GOOD FILM GREAT (Michael Wise Productions, 2019).

>> For your convenience, here’s a how-to guide for joining Zoom meetings